BART Ad Campaign: 25th Anniversary of the November 1984 Pogroms of Sikhs in India

Twenty-five years ago, in the wake of Prime Minister Indira Gandhi's assassination, members of the police and Congress (I) Party perpetrated mass murder against Sikhs in New Delhi, as well as cities throughout the country. 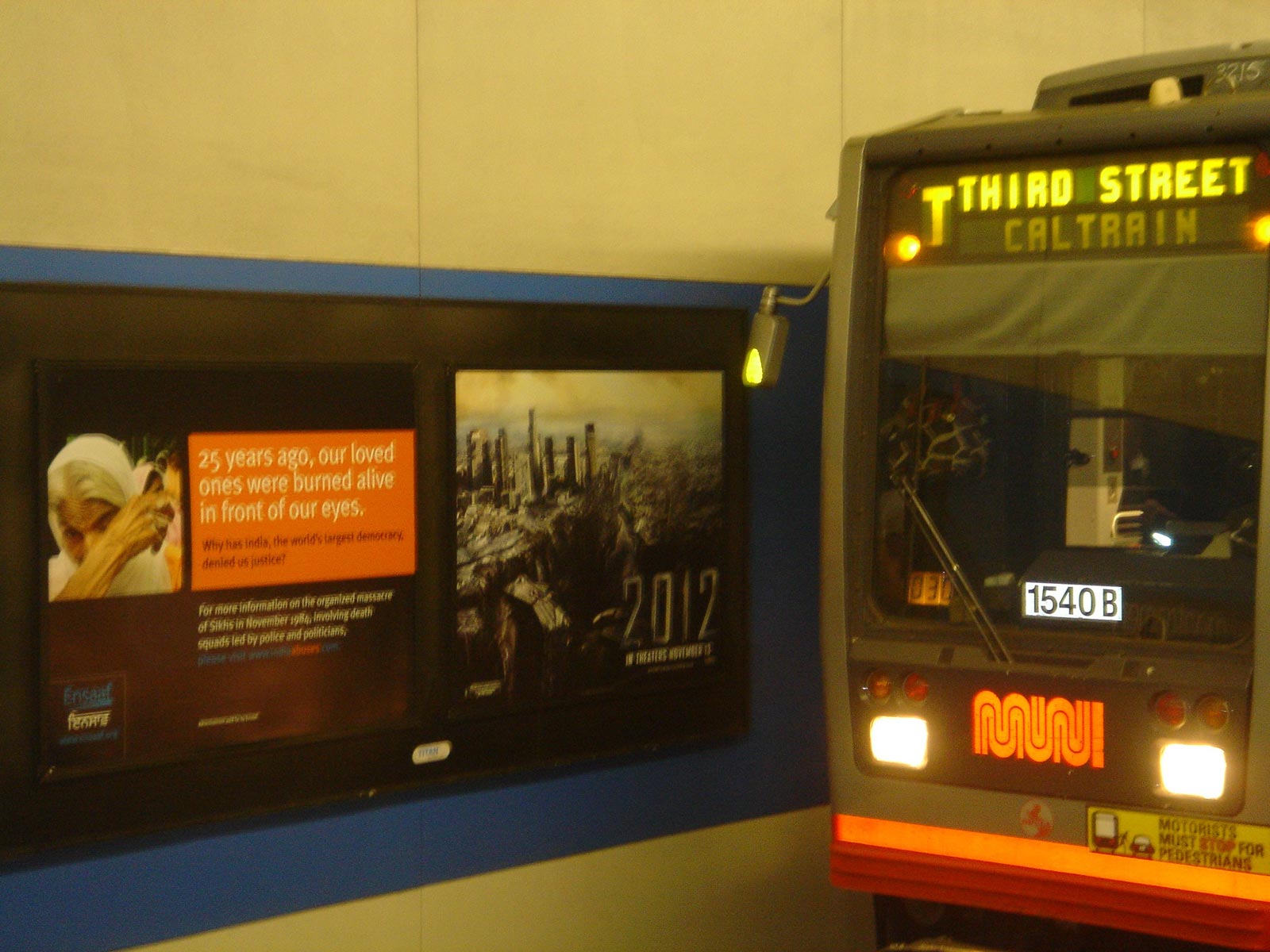 The ad was on display at some of the busiest BART and MUNI stations in San Francisco and Oakland.

2,733 Sikhs were slaughtered in four days in Delhi alone.Read the testimonies.

The organizers remain free, and Sikhs continued to be persecuted in India for over a decade after 1984.Learn about justice denied. 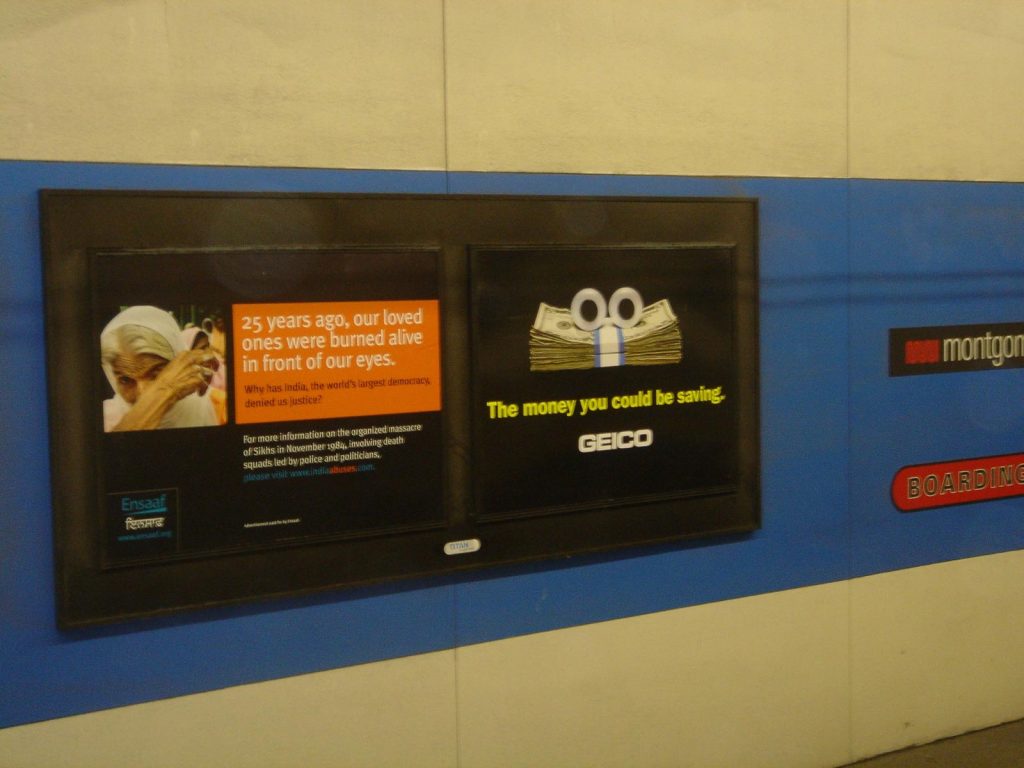 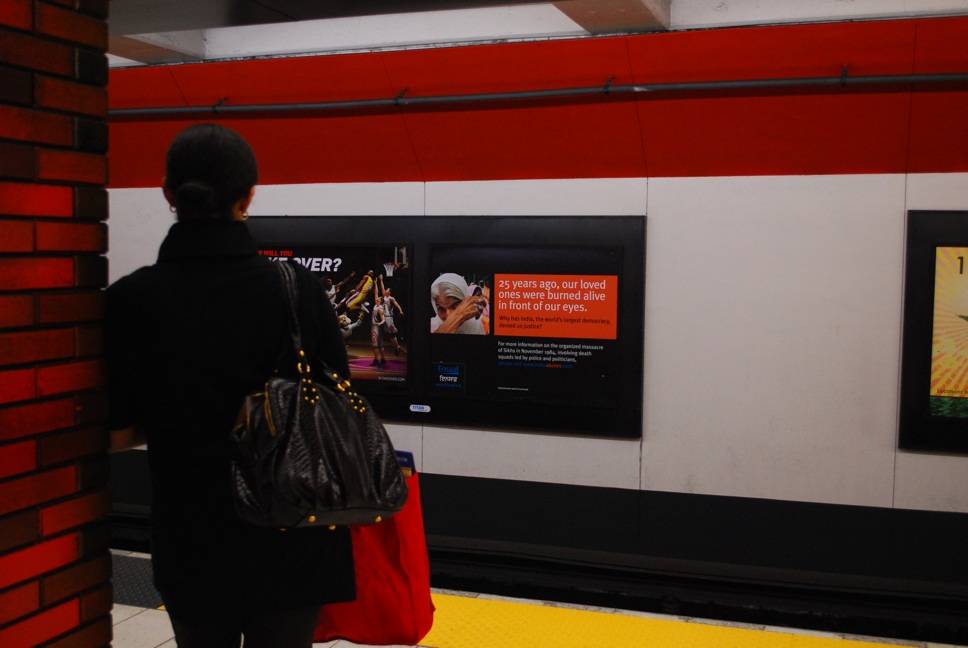 In the ad, an elderly woman wipes tears from her eyes during a protest in Delhi against political leaders implicated in the massacres. Her image is juxtaposed with the words, "25 years ago, our loved ones were burned alive in front of our eyes. Why has India, the world's largest democracy, denied us justice?" The poster further states, "For more information on the organized massacre of Sikhs in November 1984, involving death squads led by police and politicians, please visit www.indiaabuses.com." 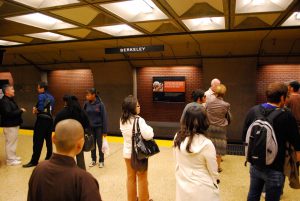 The majority of the Sikhs killed during the pogroms were brutally beaten and burned alive with kerosene oil.

After some time the mob arrived...They caught hold of my daughter Maina Kaur forcibly and started tearing her clothes...They broke the hands and feet of my daughter and kidnapped her. They confined her in their homes for three days.-Padmi Kaur, cited in Twenty Years of Impunity, page 38

Assailants forcibly cut the hair of Sikh men - kept unshorn by Sikhs according to religious discipline - humiliating them before killing them. Over 180 Gurdwaras (Sikh places of worship) were attacked during the pogroms, and mobs often defiled the Sikh scriptural canon Sri Guru Granth Sahib by urinating on it or by lighting it on fire with cigarettes.

View the official list of subsequently repaired Gurdwaras from the Delhi Development Authority.

The death squads were organized and directed by senior political party officials.

On 1st Nov.'84, Sajjan Kumar then Member of Parliament of our area, whom I know for past few...came to my house with a mob and ordered them to kill the inmates and burn the house. My two sons were dragged out and Sajjan Kumar got my sons Hoshiar Singh, 21 yrs. and Mohan Singh 18 yrs. burnt before my eyes.-Bhagwani Bai

When my brother fell down on the road immediately thereafter HKL Bhagat, who was already standing in the mob with black goggles and the people standing there were calling him as Bhagat Ji, Bhagat Ji, uttered the words to the rioters that “Yeh Saap Ka Bacha Hai, Isko Maro, Mat Choro, Agar Choroge To Bada Dukh Dega.” (“he is the son of a snake, beat him, don’t let him go, if you let him go he’ll hurt you a lot.”)-Satu Singh

Senior police officers ordered their subordinates to ignore attacks against Sikhs, ordered policemen to disarm Sikhs, systematically disabled any officers who deviated from the norm of police inaction, released culprits, and manipulated police records to destroy a paper trail of the violence and perpetrators.

...On 1-11-84 around Noon time, I went to the Wireless Room of the P.S. [police station]. There I heard a message that “Sikhs carrying kirpans are moving in Angad Nagar area.” From the other side the instructions came, “Send force to arrest them immediately.” I heard numerous other messages where the information was given about the attack on the Gurdwaras and the houses of the Sikhs but in response to those messages no instructions were given to take any action. I was totally disillusioned over this approach...-Harbans Singh, a retired New Delhi police officer

Read Harbans Singh's affidavit.Read more about the police role in the pogroms, as well as the complicity of other state institutions, in Chapter 3 of Ensaaf's report, Twenty Years of Impunity.

Police actively engaged in covering up the carnage. Under superior orders, they refused to hand over dead bodies to surviving family members, aware of the potential significance of the physical evidence. On November 2, the East District Control Room sent a wireless message, indicating police attempts to quietly remove bodies: “Deputy Comm’r of Police/East be told to remove eight dead bodies lying in Vinod Nagar.”-Mittal Report, paragraph 3.14 (cited in Twenty Years of Impunity, page 58)

Read more about the police’s role in destroying evidence in Chapter 3 of Twenty Years of Impunity.

Over 10 Commissions of Inquiry have not resulted in any justice.

While the most recent commission, headed by Justice Nanavati, acknowledged that the violence must have been organized, the closest the report came to assigning responsibility was to state:

...there is credible evidence against Shri Jagdish Tytler [former Home Minister] to the effect that very probably he had a hand in organizing attacks on Sikhs.

The imprecise language used by the report did not provide the impetus for the government to take legal action against Tytler, or any other individual. In his speech given after the Nanavati Commission report, Prime Minister Manmohan Singh apologized, but refused to assign responsibility for the massacres.

Read more about the governments response to the pogroms in the Supplement to Twenty Years of Impunity.

Sikhs continued to be persecuted for over a decade after 1984 in Punjab.

From 1984 to 1995, Indian security forces engaged in systematic human rights violations in the state of Punjab, India, as part of counterinsurgency operations aimed at crushing a violent self-determination movement. During this time Director General of Police KPS Gill expanded upon a system of rewards and incentives for police to capture and kill militants, leading to a dramatic increase in disappearances and extrajudicial executions. By the end of the “Decade of Disappearances” in 1995, security forces had disappeared or killed tens of thousands of Sikhs. As demonstrated in Ensaaf's joint report with Human Rights Watch, Protecting the Killers: A Policy of Impunity in Punjab, India (Oct. 2007), India’s institutions have failed to acknowledge the systematic and widespread nature of the abuses, and accordingly have not provided truth, justice, and reparations to the victims and survivors.

Browse Ensaaf's website to learn more about the work to end impunity and achieve justice for mass state crimes in Punjab.