The November 1984 Pogroms of Sikhs in India

In March 2007, Ensaaf released the second edition of Twenty Years of Impunity. More than two years had passed since the publication of the first edition. During that time, the Justice Nanavati Commission of Inquiry submitted its report to the Indian government, the Congress administration submitted an Action Taken Report to Parliament, and Prime Minister Manmohan Singh apologized, but refused to accept state responsibility for the massacres. The report inclues a new chapter that succinctly articulates the failings of the Nanavati Commission and the Action Taken Report, after a thorough consideration of the evidence at the government's disposal.

“With many connected to the violence now enjoying prominent positions in public life, Kaur makes it clear that India continues to ignore this dark chapter of its modern history at its own risk.”
Brad Adams, HRW

Brad Adams, Executive Director, Asia Division of Human Rights Watch
Jaskaran Kaur’s meticulous account of the failure of justice for Sikhs brings to life a period that many in India wish they could forget. With many connected to the violence now enjoying prominent positions in public life, Kaur makes it clear that India continues to ignore this dark chapter of its modern history at its own risk.

Ram Narayan Kumar, author and human rights activist
Kaur's work for truth, justice, reparation, accountability and an end to impunity in India is premised on a view of power that foresees eventual debacles for all sides when relations between the powerful and the powerless become bereft of human rights norms. India's history of impunity must give way to a new era of accountability, truth and justice. This report belongs to a program of advocacy that is essential for the restoration of the rights of Sikhs. More significantly, it is also central to the possibility of resuscitating the idea of India.

Randeep Ramesh, South Asia Correspondent, The Guardian, UK
The events of 1984 were the greatest jolt to the integrity of post independence India but their aftershocks have never been properly addressed. This book should be seen as another step in righting the wrongs of that tumultuous time.

The report reveals the systematic and organized manner in which state institutions, such as the Delhi Police, and Congress (I) officials perpetrated mass murder in November 1984 and later justified the violence in inquiry proceedings. After a thorough discussion of administrative and judicial impunity, the report applies the international law of genocide and crimes against humanity to the pogroms, relating the massacres with international understandings of gross violations of human rights.

Unless the voices of survivors are heard and recorded, history will eclipse their narratives and the silence of impunity will prevail.

“This is an age when countries as diverse as Mexico, Peru, Cambodia and Ethiopia, among others, are digging into violent eras of their histories to set records straight and name those in power who allowed human rights abuses to occur or, worse, ordered them. In two decades, there has been no similar movement for a day of reckoning in India,” writes retired New York Times reporter, and eyewitness to the massacres, Barbara Crossette in her foreword to the report. Given the recent appointment of key perpetrators to ministerial positions in the Indian government, the report encourages survivors and witnesses to take private initiatives to help end impunity.

Unless the voices of survivors are heard and recorded, history will eclipse their narratives and the silence of impunity will prevail. “We hope survivors, including those in the diaspora, will lead us and other concerned individuals in organizing and initiating documentation projects and spearheading the campaign for justice,” said Jaskaran Kaur, executive director of Ensaaf. The report describes and summarizes key failings in the Indian states enforcement of the survivors’ rights to knowledge, justice and reparation.

Ensaaf works with survivors to engage in advocacy and outreach, documents violations, and educates the public about human rights violations in India. ’s programs include Community Advocacy, Legal Advocacy, United Nations, Education and Human Rights, and Media and Human Rights. Ensaaf, which means justice in many South Asian languages, acts to implement the international rights to knowledge, justice and reparation. 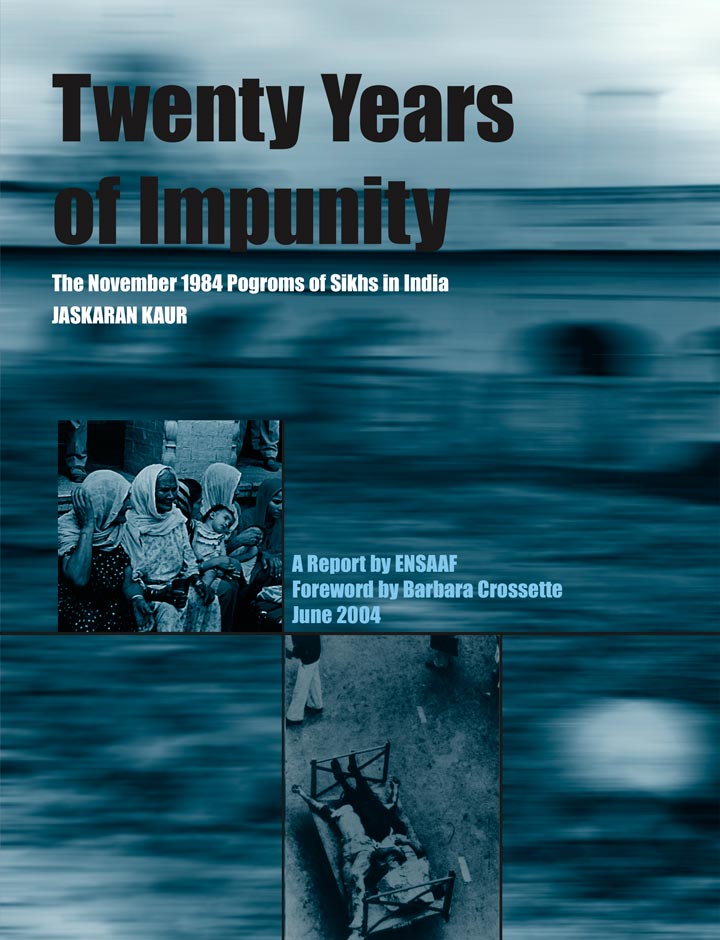