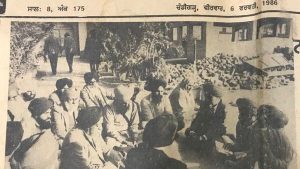 In collaboration with surviving family members, Ensaaf will also establish the Saka Nakodor Archive, to collect and document all the available material on the unlawful killings, including court records, medical records, reports, news articles, photographs, and video interviews.

Ravinder Singh, Baldhir Singh Multani, Jhilman Singh, and Harminder Singh, along with several hundred others, had gathered in Nakodar, Punjab to protest the desecration of Sahib Sri Guru Granth Sahib Ji (the sacred scripture of Sikhs) and collect the burnt remains for disposal according to Sikh religious rites.

Without warning, security forces opened fire on the procession. Security forces killed Ravinder Singh, Baldhir Singh, and Jhilman Singh in the initial firing. They chased down Harminder Singh, drew him out from where he had taken shelter, and shot him at close range.

Security forces took their bodies to the Civil Hospital in Nakodar for postmortem. When the doctors informed security forces Harminder Singh was still alive, they removed him and subsequently executed him.

Ravinder Singh’s father Baldev Singh identified the bodies at the Civil Hospital. When the families went to the hospital to collect the bodies, security forces prevented the families from claiming the bodies and secretly cremated them.

Baldev Singh launched a civil disobedience action in front of Nakodar Police Station to protest the unlawful killings and secret cremations, and was joined by local political and community leaders.

In response to the protest, the Punjab government agreed to establish a commission of inquiry into the shootings.

In 2019, over three decades later, and only after continuous advocacy, the families received Part 1 of the inquiry report, which found:

The order that effective firing should be on the lower part of the body was completely ignored, and it appears that the bullets were intentionally aimed towards the vital body parts of the four persons killed …The police firing at Nakodar on the 4th of February, 1986 was not justified and could have been avoided.

The government alleges that Part 2 of the report, which contains hundreds of pages of testimony, has gone missing.

The families have pursued numerous remedies, including filing a petition with the Punjab & Haryana High Court, right to information act requests, and a complaint with the United Nations Human Rights Council.

During these intervening 35 years, all of the victims’ parents, except for the parents of Ravinder Singh, have died while awaiting justice.

We and the other victims’ families have been living with the trauma of these murders and the callous attitudes of successive governments for 35 years… We…urge you to constitute a Special Investigation Team with a time bound mandate to bring charges against the perpetrators of this atrocity while the witnesses, perpetrators, and aged parents of the victims are still alive.

Ensaaf reiterates the demands of the survivors and calls on the government to immediately release the complete commission of inquiry report and investigate and prosecute the officials responsible not only for the unlawful killings, but also the cover-up that has caused the denial of justice for so many decades.

I certainly know how to live with the thoughts of my son and his friends who have been killed in cold blood.

I have been coming to terms with it, every single day. Our family and that of the other three martyrs have lived with this trauma for 35 years. We lost our sons, it was tragic enough. What followed added insult to injury. It was another tragedy to live through. No family member could have a last glimpse of their beloved sons. I was the only one who forced my way to have a last glimpse. Yet, I was cheated and not allowed to cremate their bodies in a dignified manner with religious rites. Subsequently, we were intimidated and harassed by the Punjab police so as to deter us from seeking justice.

The government and even the judicial system has failed us. Beyond usual lip service during election cycles, neither the Akali Dal nor Congress governments have taken any concrete steps to bring perpetrators to justice. The Akali Dal, in fact, elevated the prime accused administrator Darbara Singh ‘Guru’ and Police Chief Izhar Alam to high party posts. Judiciary is moving at a snail’s pace. In the interest of justice in a legal and peaceful manner, we continue to have faith in the system, determined to fight on for justice and closure. The only closure is a trial of the accused. Let the judiciary decide in an unbiased manner.  Had this been done earlier, the long years of impunity to police and political leaders in Punjab may have been controlled. If this impunity is allowed to continue, it will have disastrous consequences for families and society.